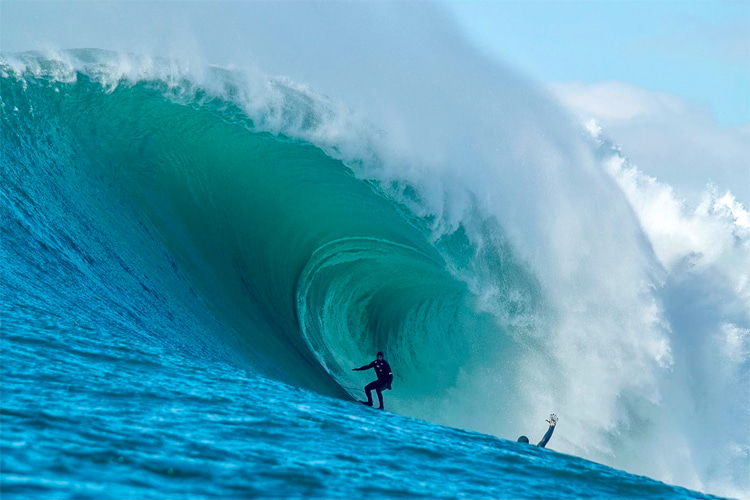 Peter is one of the most talented big wave athletes of his generation. Here's what you need to know about the Santa Cruz surfer.

Surf fans know his style, commitment, courage, and fluidity. And they can instantly recognize his voice from the surfing events.

Peter Mel might not be the world's fastest talker, but he surely produces more spoken words than any surfer on the planet.

Intelligent and friendly, warm and often good-tempered, focused and professional, the Northern Californian wave rider is always up for a challenging surf.

Smile, you're about to meet surfing's largest flying bird. 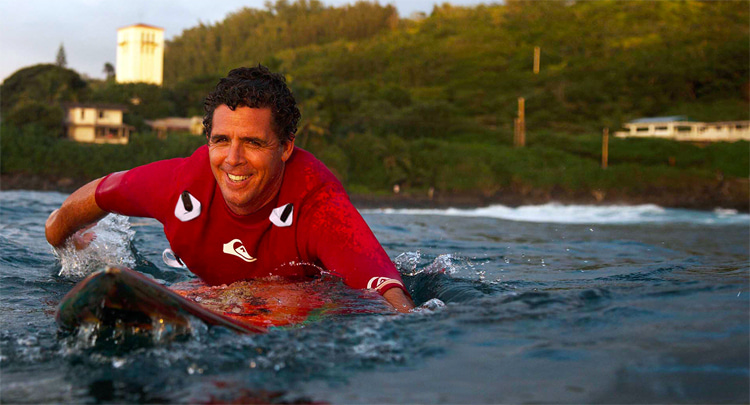 Made in Santa Cruz

His father, John Mel, learned the art of surfboard shaping with Skip Frye at Gordon & Smith in San Diego.

He was a four-time national surfing champion.

Soon after developing his shaping skills, John moved temporarily to the North Shore of Oahu, Hawaii.

After relocating to Santa Cruz, the patriarch and his wife Kim opened Freeline Surf Shop and welcomed Peter into their lives.

The young Mel started surfing at the age of six in Capitola, Northern California.

His first contact with bigger waves occurred when Peter was for the first on the North Shore of Hawaii for the US Surfing Championships in Makaha.

"I was 14 years old, on my first trip away from home, and I went out at Sunset Beach and borrowed a bigger board from a friend of mine," recalls Mel.

"I caught a wave, and that feeling right there when I kicked out in the channel when you cross the finish line is what I've been chasing."

"That glow is truly being alive; that's truly living in the moment." 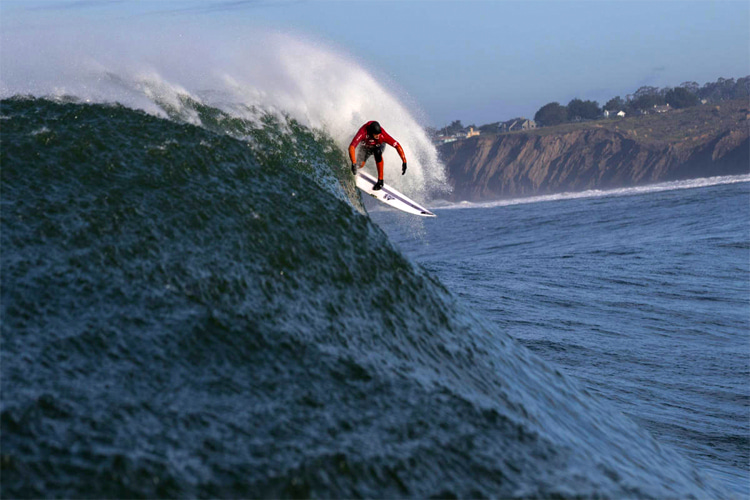 "The Condor" Takes Off

In 1984, the Eastside Santa Cruz surfer finished third in the junior division of the US Surfing Championships.

At 20-year-old, Mel was already an all-around surfer, comfortable in double overhead waves, and competent as an aerialist.

Steamer Lane and Mitchell's Cove were his playgrounds.

Mel got his inspiration from Richard Schmidt, a Santa Cruz surf instructor and lifeguard who excelled in Hawaii in the heavy surf.

College was not part of his plans.

"My education was graduation from Aptos High School," revealed Peter.

"I did a year at Cabrillo [Community College], but I was too involved in trying to go surfing and competing that I finished maybe ten units."

In 1997, he won the O'Neill Cold Water Classic at his home break.

By then, the Northern Californian had already developed a unique riding style.

"Mel drew polished and powerful lines on the wave and rode with his long arms extended and often swept back," notes Matt Warshaw, author of "The Encyclopedia of Surfing."

"He was known as 'The Condor' years before coming into big-wave fame." 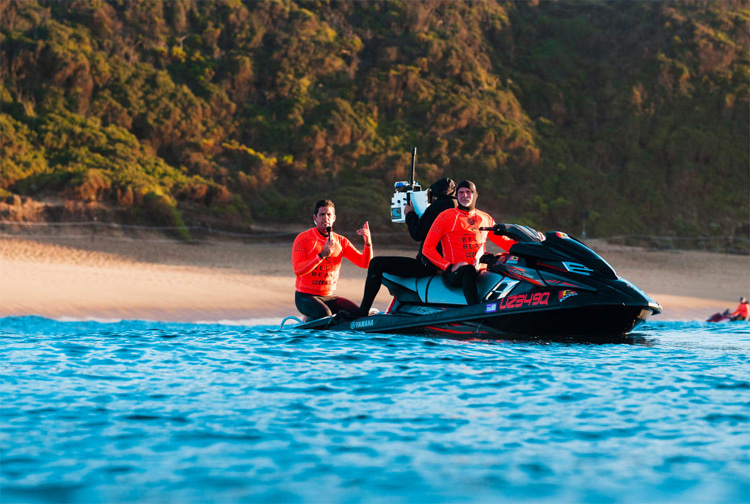 The Taste for Heavy Waters

Peter Mel surfed Mavericks, the infamous NorCal surf break, in 1990. He was 31.

In less than a decade, he became the most prolific surfer at Half Moon Bay's shark-infest cold water spot.

Before his first truly memorable moment at Mavericks, "The Condor" finished runner-up in the K2 Big-Wave Challenge 1998 and fourth in the 1999 Quiksilver in Memory of Eddie Aikau contest at Waimea Bay.

But the competitive luck was not by his side at his favorite arena.

"Mel was an odds-on favorite for the Mavericks contest, first held in 1999," recalls Warshaw.

"And while he made the finals, first place went to fellow Santa Cruz charger Darryl 'Flea' Virostko."

"For the next two Mavericks events, the story was the same - Mel gliding his way to the last heat of the day, but Virostko taking the win."

It was time to step up the game. In other words, tow-in time.

Suddenly, he was towed into a massive, heavy wave that would enter the annals of surfing history.

Up to that point, it was the biggest wave ever ridden outside of Hawaii.

Big wave surfing had now become an integral part of his life, and fear was something manageable.

"Getting in there and overcoming that fear is the ultimate thrill, and that's why we're all drawn to it," he expressed. 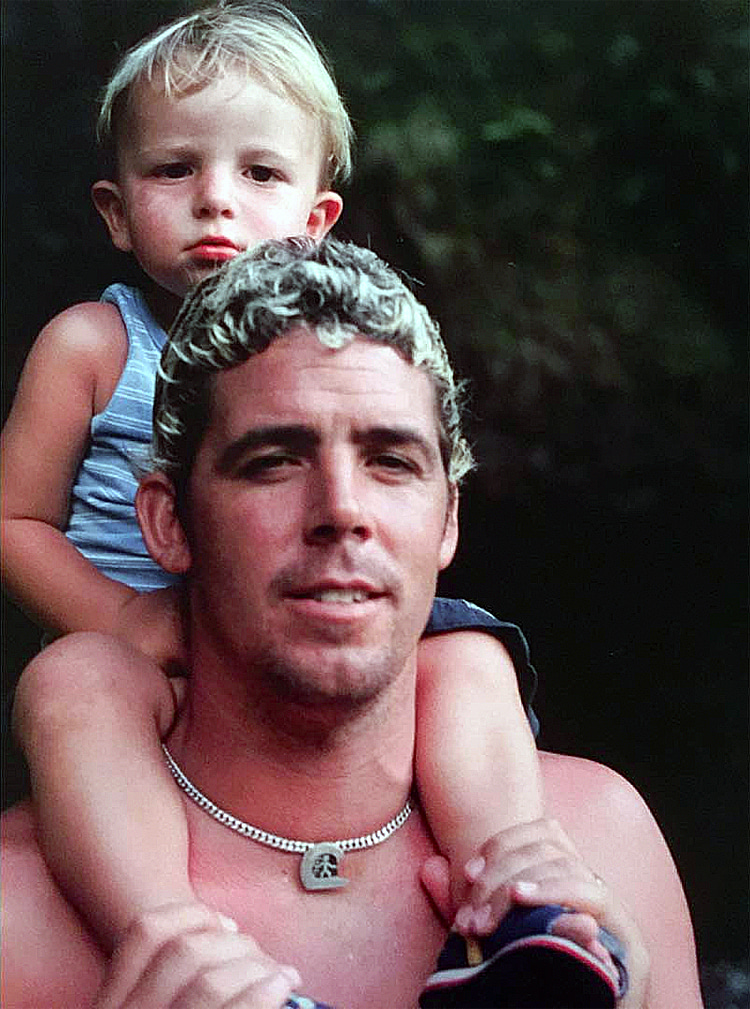 In 2001, Mel and a group of swell hunters embarked on a strike mission to Cortes Bank, the offshore surf break exploding 110 miles west of Point Loma, San Diego.

One of the waves ridden at the Pacific Ocean spot ended up winning the inaugural XXL Big Wave Awards.

In 2006, already married to Tara and father of John, Mel checked himself into rehab to overcome his addiction to methamphetamines.

He always had the support of his family.

"Failure is the best way to learn because you're feeling it. You feel that emotion, you feel the downs, and you have to turn that around," the Californian said of his darkest days.

"It's really easy to say; it's a heck of a lot harder to do. And it takes time."

"I've packed stuff away too, and that's what I was doing when I was partying - I was packing stuff away that I wasn't proud of. And I had to unload that and be light again. And it took some time."

A few years later, Peter Mel was ready for a glorious comeback - healthy, fully energized, and eager to conquer the world.

"I've had to find a balance. There was a period of time it was all about me, only me, and that selfishness, that ego, I've had to look at that," stated Mel.

"It can't just be so full of yourself all the time - you have to ground yourself."

"Finding balances is actually looking in the mirror and going, 'okay: what is what's truly important? What's important for the family and the people around me that I deal with day-to-day?"

"My wife's a big part of my career. She's been my manager, she's in my marketing, and she's rebuilt the shop. I mean, it's she's amazing." 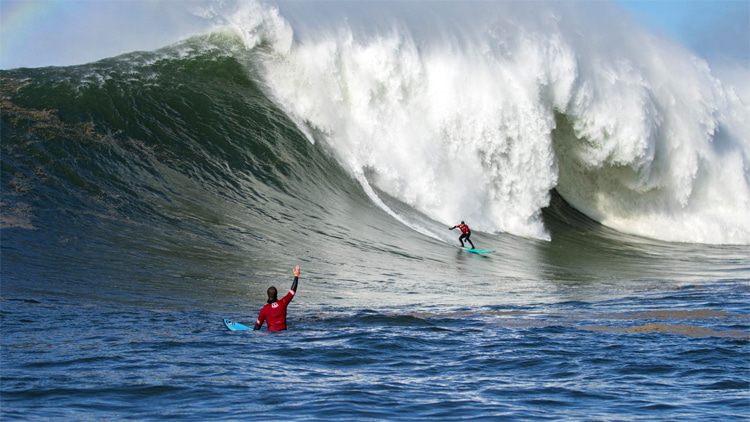 And in early 2013, Peter finally got the Mavericks Invitational trophy that had repeatedly eluded him in years past.

The regular-footer retired from professional surfing in 2013 to become a Big Wave Tour commissioner and later a regular commentator at World Surf League (WSL) events.

"I don't always just focus a hundred percent on something," underlines Mel.

"It's like, 'the professional surfing career things are going, but I've also got big waves, so I might start chasing big waves."

On January 8, 2021, Mel rode one of his biggest and most perfect waves at Mavericks. The stunt earned him "Ride of the Year."

In 2022, the legendary Santa Cruz big wave surfer was inducted into the Surfers' Hall of Fame in Huntington Beach, California.

He also appeared as himself in the Hollywood blockbuster "Chasing Mavericks" (2014).

Besides Santa Cruz, there are two places where he always feels at home.

"Most people know English, but I'd love to learn the Portuguese language. It's hot and cold, and the waves are great, so that would be a place that I would love to be."

"And I also enjoy Australia."

And here are three things you might not know about him.

First, he loves Justin's Peanut Butter. Second, he always travels with alcohol wipes to clean up his seat around so that he doesn't get sick.

Third, when he's flying around the world, he carries a warm and lightweight sweatshirt that he uses to put over his hand and his head.

And is Peter Mel a night owl or an early bird?

"I don't like to stay up too late. I like to have a good sleep, so I'm kind of literally running off of the Earth's time clock, and I think that's key."

"The Condor" likes to read Eckhart Tolle. "He's my Yoda."

Thank you for shopping local!

Our online store is now open for business

check out the products page for info on inventory